Although not exempt to the challenges posed by the health crisis, self-storage properties have demonstrated resilience over the past 16 months. Before the pandemic arrived, the sector was contending with the detrimental effects of record construction activity on fundamentals, especially rents. The sudden shift to remote learning and working, as well as a greater emphasis on outdoor activities and migration to less dense areas, created new needs for storage units. An increase in move-ins, paired with fewer move-outs, pushed the national vacancy rate down to a multi decade low of 7.2 percent last year.

After shutdowns last year, the economy is making significant positive progress as vaccination rates climb. Most states have largely reopened, providing more avenues for previously sequestered households to allocate their pent-up dollars. The combined value of both personal savings accounts and money market funds has risen  by over $4 trillion since the start of the health crisis, which has translated into higher overall spending as the economy reopens. Core retail sales topped $430 billion in April, 15 percent above the pre-pandemic level.

Improving economy to aid sector as some short-term needs end.

As the economy reopens, some pandemic-specific demand drivers for self-storage are dissipating. College students who had placed belongings into storage when campuses closed will retrieve their supplies as they return to class-rooms. Similarly, a shift back into offices may free up space at home. The need to rent a storage unit during a relocation, such as the recent migration trend from urban to suburban areas, will continue, however. While accelerated by the health crisis, this population shift is partially due to the aging of the millennial population. As the broader economy recovers, other traditional demand drivers will return as well.

Total completions expected for 2021 will fall below the 60 million-square-foot mark for the first time in three years. The relative slowdown will help lower competition for tenants among new projects. The composition of the development pipeline is also shifting to favor markets with higher absorption potential. Several of the metros where inventories are slated to grow the most in 2021 have trailed in construction in recent years, such as New York City, Sacramento and Las Vegas, or are recording robust population growth, including Phoenix and southeast Florida. 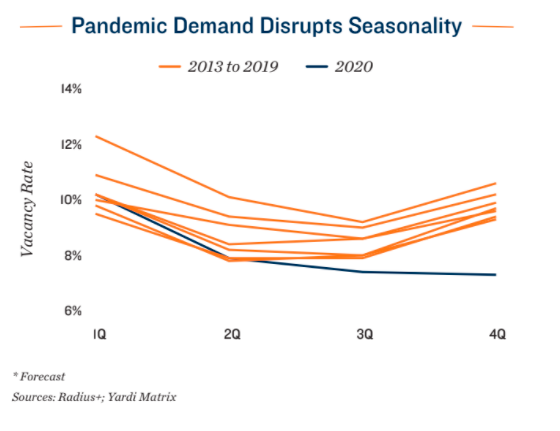 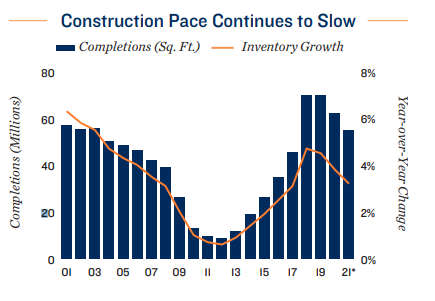 By encouraging people to stay at home, pandemic health guidelines accentuated some of the advantages of living in a suburban setting. This prompted more households that were in urban areas to move, a trend that will continue after the health crisis as the young adult population ages. The median age of a millennial is 30, with the oldest of the cohort now entering their 40s. Family formation often occurs in that age group. In the years ahead, as more millennial households age and expand, they will seek larger living accommodations, which are often situated in less costly suburban neighborhoods, including those in other metros.

Current renter profiles suggest self-storage use may continue after move.

Renters of storage units who relocate from a smaller downtown apartment to a larger suburban dwelling may not cease self-storage use. Even though many single-family homes have access to additional storage space in the form of garages, basements and attics, over 72 percent of all current non-business self-storage renters live in such a residence. As previous generations have aged and expanded their living situations, they have continued to need separate storage space. That dynamic may manifest among the aging millennial generation. At the same time, demand will continue for self-storage units near urbanized residential areas. 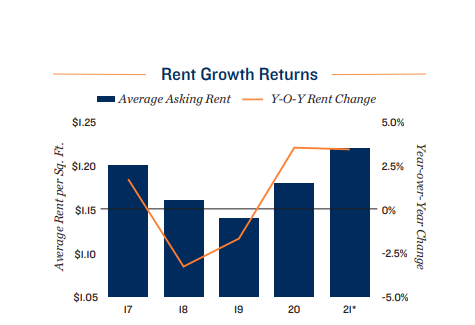 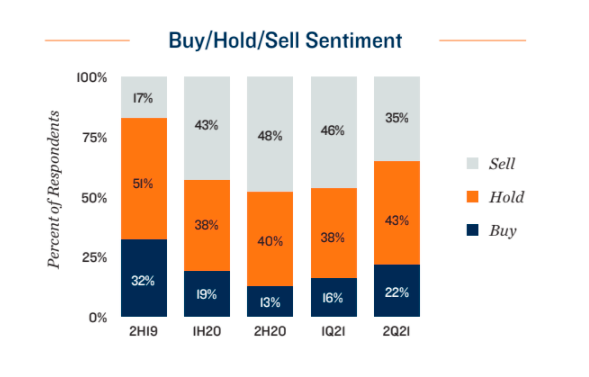 A June survey of self-storage investors reveals a favorable outlook for the sector. About 85 percent of respondents anticipate vacancy to fall or remain stable over the next 12 months, while 73 percent of investors expect the average asking rent to rise. Only 4 percent of respondents predict a rent decline. Even if the national vacancy rate holds flat, as about half of investors expect, the rapid contraction of unit availability since 2019 has been more than sufficient to renew upward movement in marketed rents. These favorable performance expectations are also reflected in a positive outlook for property values and cap rates. Over 90 percent of investors expect sales prices to hold or climb in 2021, while 81 percent of respondents anticipate cap rates to stay the same or contract. Since 2017 the average sale price has increased 18 percent, while the mean cap rate has stayed in the mid-6 percent zone, supporting this outlook. 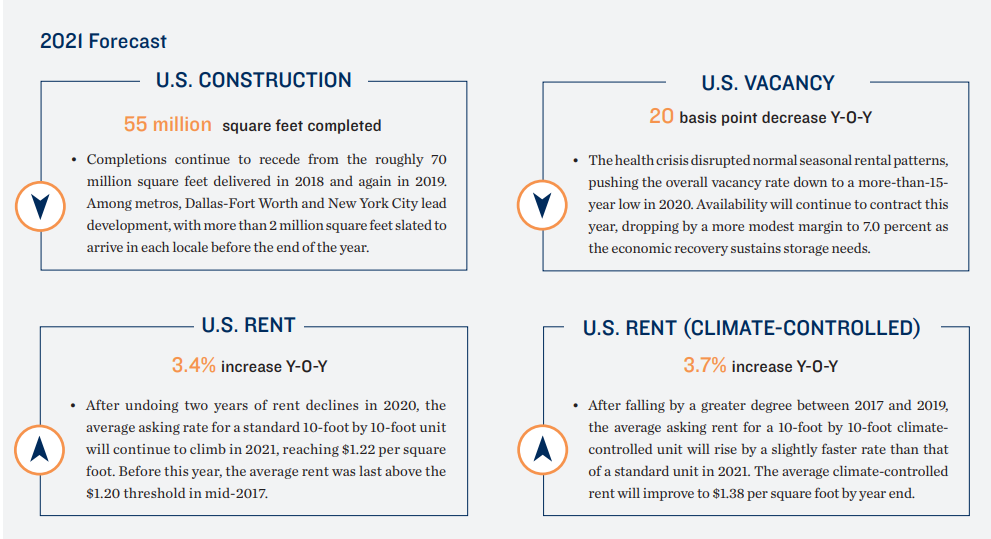 Trading activity only dipped 5 percent in 2020 following a record year for transactions in 2019, with investor sentiment buoyed by improving property performance. Competition for listings is applying momentum to sale prices, which have already improved 6 percent year over year for the 12-month period ending in March to an average of $117 per square foot. The mean cap rate has so far held in the mid-6 percent zone, but downward pressure is mounting. Interest for high-quality assets in growing submarkets has led to cap rates of under 4 percent for some recent trades which will likely draw the average return down in the coming months.

Stringent and prolonged lockdowns in many of the major West Coast and Northeast metros reduced buyer interest in these areas last year, while other regions of the country recorded similar or increased transaction levels. Favorable population dynamics and relatively low business costs are drawing investors to the Southeast and Southwest, comprising more than half of all trades completed last year.

Although hard hit by the pandemic, the Bay Area, New York City, and Los Angeles are still recording institutional self-storage investment at sale prices over $20 million. A low level of inventory relative to population supports positive long-term outlooks for these and similar metros, drawing buyers who can afford the high entry costs. Secondary and tertiary markets meanwhile continue to draw a large number of smaller investor groups and private buyers, aided by lower sales prices and stronger household formation. 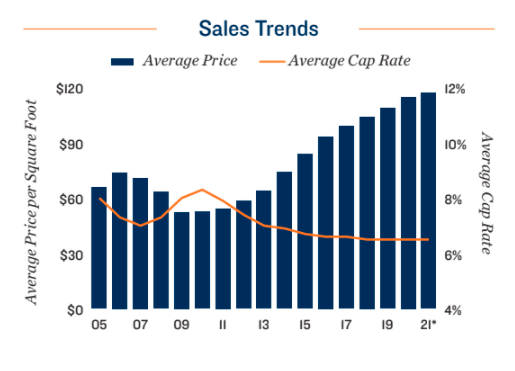 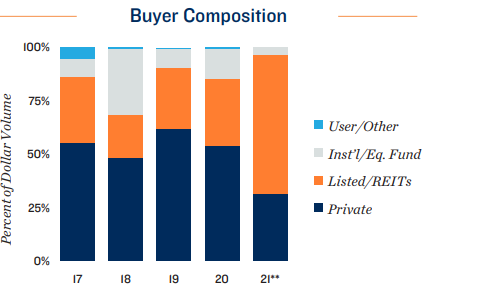 Applying lessons learned from the global financial crisis, Congress and the Federal Reserve acted swiftly to preserve market liquidity and support borrowers amid the pandemic last year. As U.S. infections recede and the economy reopens, attention is shifting to the potential longer-term ramifications of these actions. The rapid increase in money supply from multiple stimulus provisions paired with low interest rates and disrupted supply chains has led to higher inflation, with core CPI climbing 3.8 percent annually in May. While above earlier expectations, the Federal Open Market Committee (FOMC) still considers this a transitory concern and intends to allow inflation to stay above the traditional 2 percent growth target for longer than it has in the past. The Fed also expects to keep the overnight lending rate low for the near future, citing still-high unemployment as one reason to hold off. More committee members are now open to the prospect of raising rates in 2023, however. Current quantitative easing practices will also remain in effect for the time being. The FOMC will wait for more substantial economic progress before tapering asset purchases, although some pandemic period programs have already expired.

Following significant disruptions last year, the majority of lenders are now active and anticipating larger volume after 2020's slowdown. Sentiment is improving, aided by a 10-year Treasury rate in the 1.5 percent range and greater population mobility, which will help properties in commercial and travel hubs that were disproportionately affected by lockdowns. Lenders are nevertheless favoring borrowers with whom they have an established and positive relationship. A borrower's credit worthiness and track record bear considerable weight when accessing capital, as does recent property performance, including rent collections. More opportunities are available for assets that demonstrated durability during the pandemic or are now in a strong recovery position. The strong performance of self-storage properties during the pandemic have distinguished these properties among lenders. Capital is readily available for the refinancing or sale of existing properties from banks, credit unions, as well as life insurance companies, and are involved in CMBS securitizations. 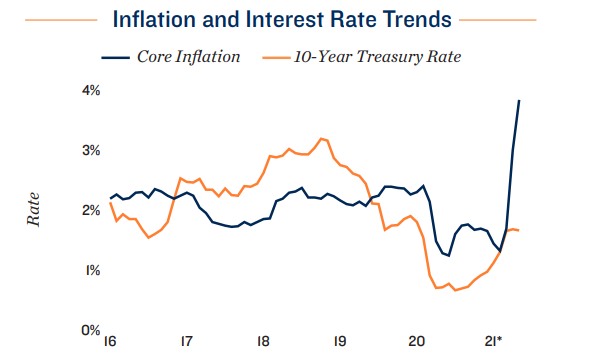 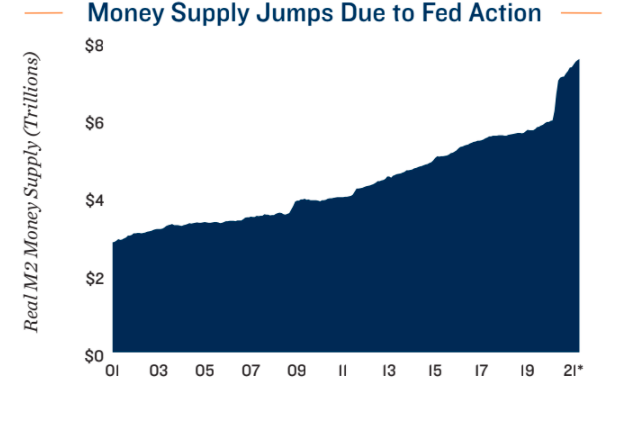